“Unfortunately bike rental is a seasonal business and we are now closed for winter. However, our friends in Fort William might be able to help you out.” Ouch! Due to injury in my right foot keeping me off from running, my biking season has just started!

Last time I was in Scotland was more than 15 years ago visiting a friend who had moved to Dumfries as a dentist. Back then, we played with the idea of visiting the Highlands, but it turned out we ended up visiting way too many pubs to make it all the way to the north. Now, I wanted to give it another go.

My expectations for January in Highlands varied from snowy mountains and icy trails to pouring rain (mostly horizontally), but they all included one common aspect – it was definitely going to be cold. I packed up most of my winter biking gear acquired for Rovaniemi 150 Arctic Winter Race a couple years back (check out my story and photos here) and set off to Edinburgh.

“I´d be interested in riding the Great Glen Way mid-January. I´m flying to Edinburgh on Friday and planning to take a train from there to Fort William. I´d stay there overnight and start pedaling early Saturday morning. I need to fly out from Edinburgh early Tuesday, so I´d need to catch a train from the other end of the trail (Inverness?) to Edinburgh on Monday evening.

To make it happen I need

Train ride from Edinburgh to Fort William lasted less than four hours. Right when it was getting dark I found myself standing on an empty platform with two large backpacs full of biking gear in a small Highland village surrounded by snow-capped mountains. Temperature was close to zero and I quickly pulled out my hat and gloves before starting the walk towards bike shop.

As soon as I stepped in Nevis Cycles and shook hands with the lovely gentleman, I knew I was in good hands. He pulled out a hard tail mountain bike with two panner bags attached, and provided me the basics of what to expect on the trail. I also dropped off my luggage which I was hoping to meet again at the other end of the Great Glen Way trail in Inverness, within 3 days.

The trail followed Caledonian Canal making the first day rather flat but really beautiful. It started to get really windy around Loch Lochy but luckily I ended up doing the trail northwards so the wind was behind my back. A couple of dog-walkers around the villages aside, I didn´t meet anyone along the trail.

Making small adjustments to the bike and trying to keep myself riding on the left side on the short road sections, I made it to Fort Augustus right after dusk. Blinding the B&B lady with my headlamp, I awkwardly picked shower from the two options provided (shower/bath) very early in the conversation. Must have had something to do with my funny biker-smell.

My saturday night dinner in the local pub turned out to be a starter and two main courses served with a couple of pints of local ale. When I finally felt a bit less hungry, I retreated back to B&B and slept like a baby until my alarm went off at 7:15 the next morning.

I made sure to be out the door as soon as there was daylight as I knew the 2nd day would be tough with some serious climbing. Once out of Fort Augustus, the trail took me to a crossroads providing options for “high route” and “low route”. Obviously, I went for the high one and soon enough, the trail started steering straight up the mountain.

In a sweaty hour or two, I was above the treeline enjoying spectacular views over Loch Ness. It was some of the best biking I´ve experienced. The well-maintained trail remained above treeline undulating up and down offering great sceneries where ever you look. The only downside of it all was the constant urge to stop for photos and just soaking in the scene. 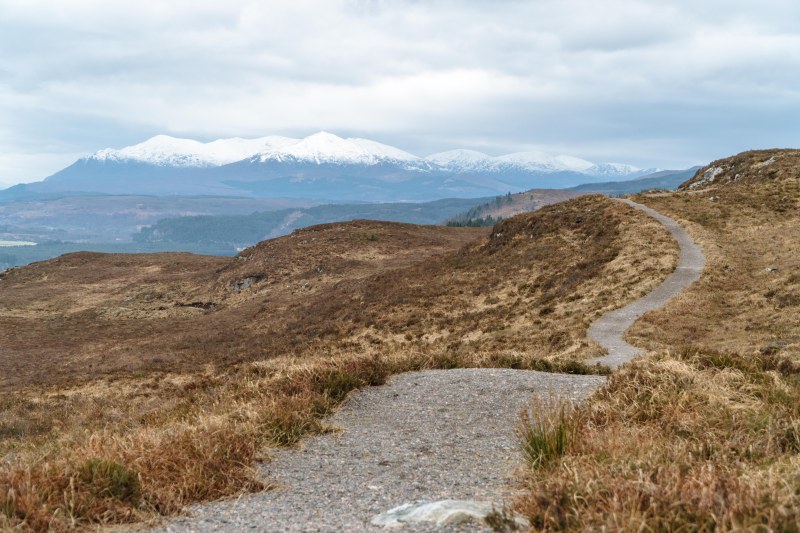 My next overnight was in Drumnadorchit and half way there, the trail dropped all the way back down to lakeside offering another selection of high and low routes. There was roughly 2,5 hours of daylight left and still 21k+ to cover on both options. With the low route it sounded easy, but remembering the early morning climb on the high route, I really needed to think wether another pop on the high route with equal amount of climb would make sense at this hour.

Eventually, I decided to head up again after making sure I had charged the battery on my headlamp as I was most likely going to need it. 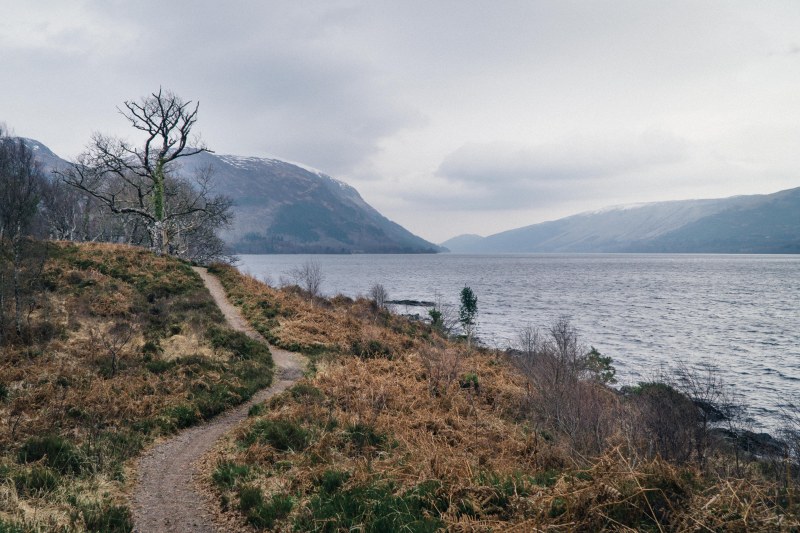 I tried to keep up a good pace on the climb but the long day on the bike was starting to take its toll. My legs were feeling heavy, my back was burning from pushing the bike up the mountains, and I needed to stop for catching my breath every 5-10 minutes. Additionally, the wind had started to really pick up.

When I reached the treeline again, the storm was all over me. Wind came in with gusts with no common direction trying to push me off the trail. The pannier bags on my bike made for a good sail and the big backpack on me didn´t help much either. I slowly wobbled on and hoped for the trail to turn back down for some tree cover. I guess the scenery was still great, but I didn´t have the energy to take any joy from it.

Eventually, the trail descended down to a pine forest, which ended up being even more scary than the open hills above. Tall trees were swaying and crackling making me constantly scared of one of them falling down right on me. I pedaled downhill as fast as I dared and tried to make it to the village before dark. Then it started raining. 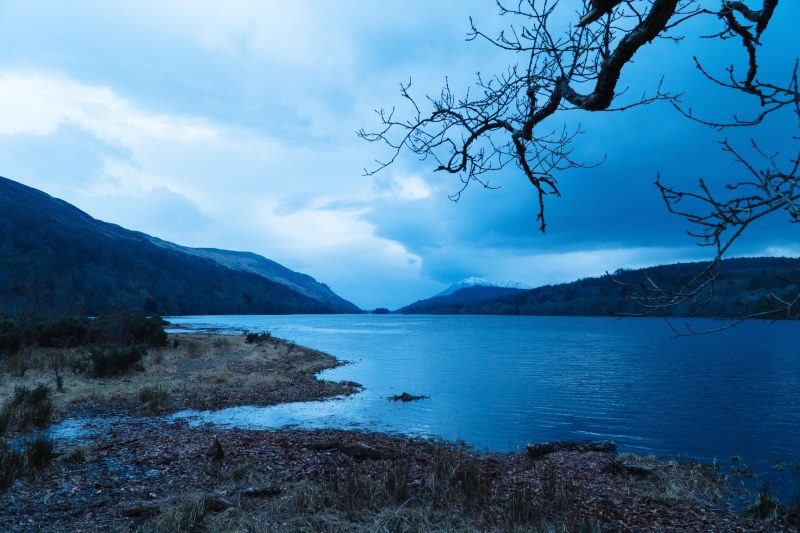 First it was a drizzle – no biggie, I figured – and then the skies opened and it started pouring. I stopped under a tree for some cover and digged out my gore-tex jacket. Cruising down the muddy trails, I finally arrived to Drumnadorchit, again in darkness, looking for any rain cover to take a look at the map to find my accommodation.

Another dinner of two main courses with a couple of pints in the local pub and I was asleep before my head hit the pillow.

The best part of traveling alone is the thing that everybody starts chatting with you. Wether it was on the trail, in pubs, at accommodation or on the streets – people start talking. And they talk about everything. Weather, family, hobbies, the area around, and obviously – they want to hear of the journey you´re on.

Everybody I encountered during the first two days had warned me about the final day´s journey from Drumnadorchit to Inverness. I was to expect a long steep climb for the start of the day and then slowly descend towards Inverness. Distance WISE, it didn´t look like much, but everyone kept telling me it was going to be a long tough day. I sould even be worried about missing my train from Inverness back to Edinburgh at 6:45PM.

At first daylight I found myself at the start of the climb. Sun was rising behind Loch Ness and I had my mind set at the top. I was expecting a tough day ahead and was prepared to keep the pace up to make it to Inverness in time.

Turned out, day 3 was the easiest day of the whole trip. I was at the top before 10AM and the way down was a breeze. I entered the outskirts of Inverness early afternoon and after a bit of confusion located the bike shop to drop off the rental bike and pick up my luggage.

Five hour wait before the train to Edinburgh – what would you do with all that time in a small Scottich town?